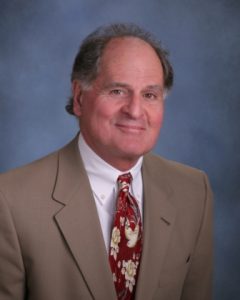 Jim’s practice includes Trial Litigation both civil and criminal, including Personal Injury, Workers Compensation and other accident and disability-related causes of action.

Following graduation from Michigan State University, he attended Detroit College of Law which was interrupted when he was drafted into the United States Army and sent to Vietnam for a one-year tour of duty from 1969 through 1970.

Upon discharge from the United States Army in July of 1970, Jim returned to Detroit College of Law graduating with his Juris Doctor degree in January of 1973.

Following graduation, Jim was hired as an Assistant Prosecuting Attorney in Livingston County, Michigan from April of 1973 through June of 1975.

In 1975, Jim’s partner, Stephen A. Kastran, and he formed their law partnership located at 313 Hubbard Street, Allegan, Michigan.

Jim has been a member of the State Bar of Michigan from 1973 to the present time.

He has been a member of the Allegan County Bar Association from 1973 through the present time and has served as its President and Vice President.

He has been appointed to and served on the City of Allegan’s Economic Development Corporation, being involved with incorporating this agency at its time of origin and serving as its President.

Jim has also served as an officer on the Allegan Chamber of Commerce, and various other community organizations.

He has been admitted to practice in all Courts in the State of Michigan, Federal Court, the 6th Circuit Court of Appeals and the United States Supreme Court.

Jim’s practice includes Trial Litigation both civil and criminal, including Personal Injury, Workers Compensation and other accident and disability-related causes of action.